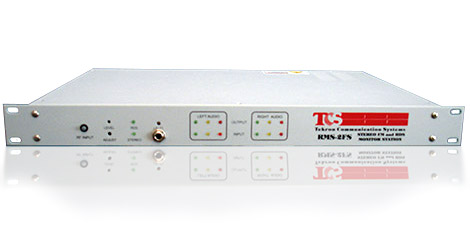 The RSS-2R is a Broadband Automatic Switch, designed for the redundancy of CATV feeds in Headend and Hub sites. It monitors the RF Broadband feeds of the main and backup input feeds for automatic switchover to the backup input when the RF level of the main feed drops below its threshold setting, with automatic return on signal restoration.

The RSS-2R automatic switch covers a wide input RF level range and thus can be used to monitor feeds before or after Broadband amplifiers after Fiber receiver, or monitor a single TV channel in the 5 MHz to 1GHz CATV Band. It is designed for continuous and independent monitoring of both main and backup Broadband level inputs and will only switch to the backup input feed when the RF level of that input is above its threshold setting.

The RSS-2R incorporates front-panel switch override capability as well as indication of switch position & level status. An Ethernet/IP port is available for remote monitoring, alarm and control of the RSS station via SNMP protocol & Web-page. A serial port is also available for connection to modem for dial-up DTMF-tone (phone) switch control in emergency situations. The remote control of the switch overrides in this case, the RSS switch automatic operation as well as the front panel toggle switch. Optional special back-chassis terminal connections can be added for local monitoring and switch control via contact closure.

For applications where a number of Broadband feeds need to be monitored/switched at the same site, for the redundancy for example of (Driver or Launch) broadband amplifiers in the Headend, other multi-switch models are available that incorporate (2, 3 & 6) independent automatic broadband Switches in a single chassis, for saving frame-rack space at the site, with a single TCP/IP connection to the Network.

Other versions of the RSS automatic switch are also offered for the redundancy of: